Durban and KZN in a new light 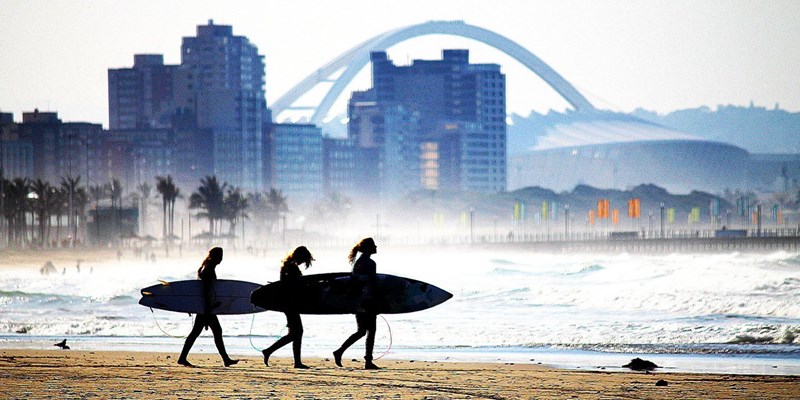 Durban has seen the emergence of a growing number of entrepreneurs who are keen to counter the perception that the city is somehow inferior to Cape Town. These business impresarios are keen to show off the city and its surrounds in a different light. Here are some examples.

Launched at the end of 2017, the Saunter is a series of arts, crafts, food and activity trails that stretches from Durban to Hilton.

Around 75 artists and crafters and 145 role-players from selected restaurants and accommodation facilities are part of The Saunter. Visitors can expect anything from visiting artists’ workshops to adventure sports like white-river rafting, 4×4 trails and mountain biking, all detailed on a website.

The Saunter is a project of the Gillitt Foundation which assists individuals and businesses maximise their potential. But the long-term intention is to set it up as a non-profit organisation. Cheryl Lefèvre of the foundation told TU that The Saunter would boost Durban’s image by showcasing some of the city’s hidden gems, including tours of temples and museums. “I want to show travellers a different side of Durban and allow them a glimpse into the creative heart of the city.

“We have amazing artists working here, some of whom are only known to the up country or overseas market. Yet people drive past us to stay in the Midlands. So, it is time to redress that and pull some of these visitors into our own area,” said Lefèvre, pointing out that travellers or tour operators are advised to make advance arrangements with artists.

The personnel behind Street Scene Tours don’t believe travellers need a guide to take them to the standard tourist hot spots. They want to take travellers behind the scenes, to show them the places only a well-explored local would know.

Street Scene Founder, Sthembiso Mbonambi, told Tourism Update: “We believe in people and in change. We want to tell the story of Durban and South Africa to travellers in a different way.”

On a Durban City Tour, Street Scene will take travellers back to a time when elephants roamed the Berea and hippos inhabited the harbour. Travellers will visit the Warwick Triangle and dive into the sensory explosion of the Victoria, Muti and early-morning markets.

The Durban Graffiti Tour visits one of Durban’s most respected graffiti artists. Travellers will hop on the bus and travel from the former bad lands of Wentworth, through to the inner city and up into the cultural hub of Glenwood.

Each area holds its own stories of artists, their narrow escapes from security and police and battles that would come to define the hierarchies of street art culture in the city.

All the activities operate out of WOWZULU marketplaces. They are gateways to rural communities that would otherwise be unable to interact with tourists, as visitors usually drive right past them to the main commercial tourism destinations.

Travellers can visit an artist’s home and learn about Zulu beadwork or help make honey on a local honey farm. They can take a tractor ride to a cattle kraal in the Drakensberg and spend the day with a local family, helping them prepare the fields, milk the cows and participate in traditional ceremonies.

BESETdurban began as an experiment, but the founders say it has now become a movement.

Founders Mark Bellingan, Jonas Barausse, Dane Forman and Cameron Finnie explain there is a common misconception that Durban is a sleepy backwater and generally unappealing. “Our intent and not-so-secret agenda is to blow that notion out the water,” they say. Rather, the city is full of grit with awesome people and fascinating history.

Slackpacking has been a popular trend around South Africa and is now also available in KZN thanks to Spekboom Tours.

The concept is ideal for travellers wanting to explore the Drakensberg Mountains on foot but who are not keen to carry tents and backpacks along. With slackpacking, travellers can enjoy all the benefits of a multi-day hike – exercise, beautiful scenery and fresh air – without the burden of a heavy backpack.

This new tour operator features a Karkloof Falls-to-Falls three-day slack-packing hike. It is an all-inclusive trek encompassing some of the most picturesque and hidden parts of the Midlands countryside. Highlights include traversing the forest canopy on a zip line tour, a visit to a world-class bird hide with the chance to spot the critically endangered Wattled Crane, and an indigenous tree trail with abundant wildlife, including various birds, antelope, zebra, wildebeest and other game.